MICHAEL SNYDER: “Monster” Hurricane Dorian Is Projected To Be “A Very Big Hurricane, Perhaps One Of The Biggest”

Here is a screen capture from Watch.org: 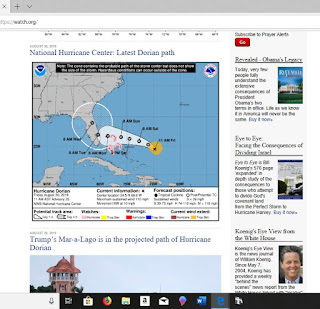 The Complete De-Platforming Of All Non-Establishment Voices

The Convenient Death of Jeffrey Epstein

The Enemy of America

The fiction of man-made global warming

The Fix Was in from the Start for Hillary's 'Exoneration,' Immunity Agreements with Aides Suggest

The 'Gay Gene' Is a Total Myth, Massive Study Concludes

The gaying of Major League Baseball, and every other professional sports league, is almost complete

The Hate Squad: Picking up where Hillary left off

The Left is accumulating hellish power over us

The Left's Endgame Is Not Chaos. It's Worse.

The Left’s War on Women

The Many Ways That Democrats Are After Your Money

The Marshall Islands in the Pacific have radiation levels up to 1,000 times higher than Chernobyl and Fukushima: With Plutonium-239, a radioactive half-life of 24,100 years

The New Me – author unknown

The ‘nightmare’ California flood more dangerous than a huge earthquake

The Repetitive Replay of History has Reached its Culmination

The scandal of Charlottesville is not what the president said about neo-Nazis, it’s what the media said he said

The Shame of Baltimore; How the Democrat machine - that Rep. Cummings is part of - destroyed Charm City

THE ULTIMATE BETRAYAL – The Truth About The Invasion of America

The upcoming SCOTUS fights over LGBT issues is about more than just employment law and LGBT protections, the outcome of this battle will affect many Americans
Posted by GardenGirl at 8/30/2019 10:41:00 AM

First, JPost let us know of a further development in the peace process:

AUG 28: Peace plan to be released only after Israel's elections, says Greenblatt

JPost reports that the "political component" of Trump's peace plan is to be released.

With the economic part of the peace plan released in June, we've seen all kinds of crazy economic turmoil. I would imagine we are about to see President Trump in all kinds of political turmoil now, perhaps starting with this second interesting news report, which also attacks Trump financially:

MSNBC's Lawrence O'Donnell, a long-time hater of President Trump, claimed to have an inside source telling him that Russian oligarchs signed financial documents for President Trump at Deutsche Bank. O'Donnell promptly backtracked when contacted by Trump's attorneys.

And this third interesting story, tropical storm Dorian became a hurricane, set to hit Florida as a Category 3 or 4 on Sunday or Monday:

AUG 28: We Are Being Told That Dorian Could Become A Category 4 Hurricane Before It Finally Slams Into The U.S. Coast

How serious will Dorian become? We won't know until we see it in the rear view mirror. FYI, "Dorian" is an Irish name that means "exile, wanderer."

San Diego City Council: Guns Must Be Locked or Disabled in Homes

Satellites Have Already Started Watching Your Every Movement

Schlichter: Get Ready For Apocalypse Ruth

Sorry If You’re Offended, but Socialism Leads to Misery and Destitution

Strange sunsets are being witnessed around the world as the Arctic burns: "Worst Arctic wildfires in 10,000 years!"

Students Asked To Identify If Racist Quotes Are From Trump Or Biden, Shocked To Find Out They’re All Biden

Students Slam Obama Immigration Quote... When They Think It's From Trump

MONEY IN THE NEWS

$7,000 in donations from Jeffrey Epstein to Chuck Schumer

$462,000 in ransom by Florida after second city crippled by cyberattack

$15 million beach-front estate for the Obamas in Martha's Vineyard; no fear of climate change

$196 million is what Nancy Pelosi is worth though her annual salary is only $193,400 -- maybe we should see her tax returns! (scroll down)

$600 million in stock sold per day in August

$8 billion in losses in 2nd quarter for Gillette after series of ads bashing, insulting males

$72 trillion is the total amount of debt in the U.S. financial system

$100 trillion -- that's how much Social Security and Medicare are UNDERFUNDED

$200 trillion -- that's how much Dems call for in spending

ARE THE U.S. AND CHINA BECOMING MORTAL ENEMIES?

We all know this probably won't end well and that there is more, much more, to come. Be watching.

AUG 25: We Are Being Warned That The Last Week Of August “Could Be Highly Volatile” For Global Financial Markets

AUG 24: China is preparing for a hot war with the United States and Trump is responding

AUG 23: A Critical Threshold Has Just Been Crossed, And Things Will NEVER Be The Same Again . . .

AUG 13: Guess Who China Is Blaming For The Riots In Hong Kong?

AUG 8: Is China Hoarding Food, Gold And Other Commodities In Anticipation Of A Global Collapse?

AUG 6: “Worst Year Ever”: The Chinese Ban On U.S. Agricultural Products Will Be A Death Blow For Countless U.S. Farms

AUG 1: "Watch Out America" - China & Russia Are Coming After The Dollar

JULY 30: We Just Witnessed 3 Major Developments That Could Easily Lead To Global War

40% Of Americans Think A Recession Is Looming

60% of Hate Crimes in NYC This Year Targeted Jews

62% Of Millennials Are Living Paycheck To Paycheck, Says Study

66% Of College Grads Regret Their Diploma, Costs And Major

80% of US medicines come from China

90% of the wild bee population in New England collapses

NEWS NUMBERS - BY THE MILLIONS

1 million illegal immigrants have court orders to leave the US

1.4 Million Lost Health Insurance Since 2016 — And Obamacare Is To Blame

2 million feminists to overthrow Trump in 2020

3 million deportations under Obama; Biden gets heckled for it

11 million illegal aliens to get free healthcare, if Dems get their way (scroll down)

60 million Hispanics in US, 52% of population growth

137 Million Americans Suffered “Medical Financial Hardship In The Past Year”

Nancy Pelosi: The Dummy Got Played

Neil deGrasse Tyson gets slammed on Twitter… by the left

Netanyahu: Some in Europe won’t wake up until Iran nukes land on them

Newest target of Left is biggest one of all: your marriage

Nunes: Without jail for Spygate 'dirty cops', no Republican will trust DOJ for ‘generations'

Matt Drudge's 'Future' Is Now Realized, And That Has Legacy Media Enraged.

May was the second wettest month in US history

Michael Snyder: 7 Unanswered Questions About Jeffrey Epstein’s Death That The Mainstream Media Needs To Be Talking About

Michael Snyder: 10 Quotes From Big Names Across The Political Spectrum That Are Suspicious About The Cause Of Epstein’s Death

Michelle Malkin: Big Data ‘Pulling the Plug’ on Conservatives ‘Who Might Tip the Scales’ in 2020

Michelle Obama Claims People Dismiss Presidency After Barack: ‘If a Black Guy Can Do It, Anybody Can’

Migrants Quarantined with UNKNOWN Disease, 10-Year Old Girl Found With 20 Types of Semen In Her

8-Year-Old 'Mini AOC' Has to Delete Parody Accounts After Doxxing, Death Threats Against Her Family

Most Americans Can’t Afford to Pay Rent, Eat Food, Buy Stuff, or Get Sick (And It’s Just Going to Get WORSE)

MSNBC Host: We’re Not Going To ‘Play Fair’ To Put Trump In Jail

Muslim Jihadis Gang-Rape, Torture, Murder 60-Yr-Old Christian Virgin; Some of her former students and neighbors were among the perpetrators

Muslims Patrolling Streets of NYC in Their Own Squad Cars: Residents Alarmed

Enormous Asteroid 2006 QQ23 Set to Skim Past Earth This Weekend

Jeff Daniels and the Arrogance of the Left

Joaquin Castro Hit List Is a Dirty Trick for the Ages

Joe Biden Asked About His Favorite Historical Figure Who Was Not a President… Answers: Thomas Jefferson

Just what gets you the 'white nationalist'/'white supremacist' label?

Here’s to the deplorables

Hey Joaquin Castro, You Inspired Me to Donate More to Donald Trump

How ATT Insiders Were Bribed To ‘Unlock’ MILLIONS Of Phones

Hundreds of bees drop dead around ‘5G towers’ in California

Hypocrisy At The Border: Trump Villified For Obama's Immigration Policy

FBI Report Says You're A Potential Domestic Terrorist if . . .

Finally, An American President Stands up to Sharpton

For Countless Americans, Living In Their Vehicles Has Become “The New Normal”

Former CNN Host Calls For "Eradication" Of Kellyanne Conway And All Trump Supporters
(gg: Yet Leftists insist that it is President Trump who is fomenting violence!)

Frederica Wilson is the Mad Hatter

From the redcoats to the black robes

Funny how no one wants to look into that report that Omar married her brother...

What a horrible weekend! Two mass shootings in less than 24 hours. Look at one of the parallels with Israel as well as the announcements and events (particularly economic with China) of July 31-Aug 5 below, and beginning about 48 hours after Jared Kushner's peace process meetings, which by the way, focused on the economic portion of President Trump's peace plan.

JULY 31: White House announces President Trump will be hosting Arab leaders at Camp David to discuss his ideas on the peace process.

AUG 1: Israel - Two attacks on two borders in one day

Two attacks on two borders (one on the southern followed by one on the northern) in less than 24 hours.

AUG 2: White House announces that the Trump Administration has launched a global campaign to decriminalize homosexuality and invites "all nations to join us!"

. . . (ACLU) declared it would be “one of the biggest days in LGBTQ legal history."

Like Israel, the US had two attacks on two borders (one on its southern border followed by one on its northern border) in less than 24 hours.

AUG 4: "Journalists," Democrats, liberals and leftists IMMEDIATELY blame President Trump. As usual, none of these groups blame the shooters or hold them responsible for their actions.

AUG 4:  Michael Snyder: Everybody Is Blaming Trump For The Mass Shootings, But There Is A Twist That Hardly Anyone Is Talking About

Then bam! Tremendous economic turmoil - a significant uptick in economic tensions between the US and China, and a big wipeout on the stock market!

AUG 5: For The First Time In 25 Years, US Treasury Just Designated China A Currency Manipulator

This is the most significant economic news:

There might be something to 'deal of the century' after all

More Than 80,000 Earthquakes Have Hit California Since July 4th, And The Aftershocks Are Headed “Toward The Garlock Fault”

JULY 31: On eve of 1-year mark, WHO calls Ebola in DRC 'relentless'

So far, the Trump plan is to address economic incentives for the Palestinians, which this outline was launched at the Bahrain conference in June, a conference the Palestinians refused to attend. In yesterday's meeting, apparently King Jordan stressed his support for the two-state solution. The article does not outline any commitments or outcomes of yesterday's meeting, only that there was a meeting.

Also yesterday, Kushner and his team met with Benjamin Netanyahu:

JPOST: Jared Kushner meets with Netanyahu in Israel as U.S. doubles down on peace plan

According to the above JPost article, the meetings are not over yet:

Arutz Sheva is reporting that President Trump himself will host a meeting at Camp David before the Israeli elections in September to discuss his peace plan proposal. The article does not mention the date of this future meeting, nor who will attend. However, the article does state some of the topics that will be presented.

As "Stage 1" of President Trump's peace plan deals with economic incentives, it might be important to watch our economic news here in America. I posted some links yesterday (coincidentally, as I did not know about the meetings). Here are a couple more economic news articles.

JULY 31: “The Stock Market Started To Fall In July…”