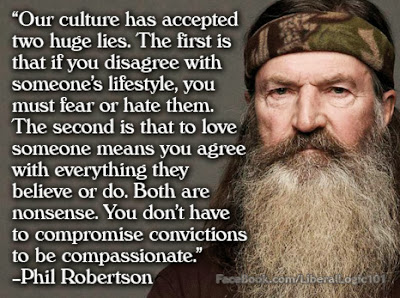 Isn't it amazing what is happening with all the blowback from Christians and outrage from the lgbt crowd? Robertson's words are being repeated often so that many are hearing what the Bible has to say about homosexuality. What happened to Robertson is outrageous, to say the least, but look at how much we are hearing the Gospel in the news now. In an attempt to shut him down, what he said is being repeated so much so that the very reason A and E shut him down, to prevent his words from spreading, is having the opposite effect -- his words are dominating the news cycle. This seems to me to be a clear example that what Satan means for harm, God can turn around for good.

Remember this from this past summer? DESMOND TUTU -- A MODERN BALAAM SPEAKS. Robertson isn't a "Balaam," but I pointed out that it all depends on who is making the comments whether he or she gets a pass or not. Tutu can say homosexuals are going to Hell, and no one blinks an eye; Robertson can disagree with their lifestyle AND say that he doesn't hate them and he is removed from his show in an effort to rebuke him.

I find it very interesting that this controversy with Robertson, who is from Louisiana, is coming at the same time as this new effort by the Obama administration to coerce people into enrolling into Obamacare by enlisting the efforts of a group of DRAG QUEENS that are ALSO from Louisiana.

And a quick note about Iran -- apparently there was a meeting in Geneva last night about "how to implement a landmark nuclear agreement."

Close with this political ad that speaks volumes about how much Obamacare has come to be associated with lying and deception.

Every Democrat should be scared of this political ad

FUKUSHIMA: Gundersen: “The real apocalyptic thing would be an earthquake” at Fukushima — We’ve got to move quickly on Unit 3, it’s by far the worst structurally — Unit 4 a walk in the park comparatively

FUKUSHIMA: 70 Navy sailors in new Fukushima lawsuit — They rode right into plume, could be thousands more seriously exposed — 1 or 2 sick could be coincidence, but 50-60 people in their 20s off one ship? Variety of cancers, blindness, impotence

LGBT: Dear A and E, congratulations! You just committed suicide

FLASHBACK from May 31, 2012: Piers Morgan has been a complete ratings disaster – his 9 p.m. slot clocked in at the lowest CNN rating for that time in two decades.

OBAMACARE: ACA may devastate the real estate and travel industries

OBAMACARE: At least he earned this one (cartoon)

OBAMACARE:  "Navigators" Can Email Your Private Data to Their Home Computers